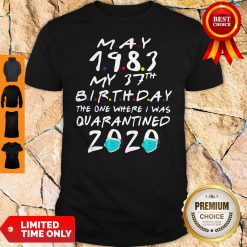 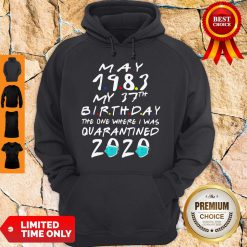 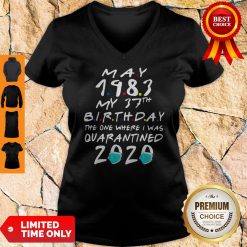 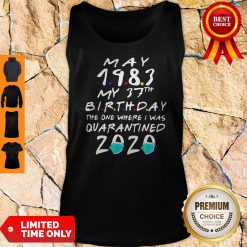 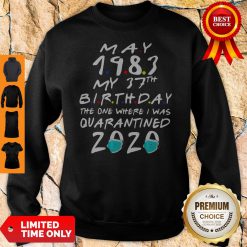 I got a Barney raincoat. Unfortunately the correct size, I was a small kid and very sensitive to being called younger than my age. That for Christmas from a distant aunt when I was 9. My 5-year-old little sister got a matching one. She was much more excited about it than me. My mom forced me to wear the May 1983 My 37th Birthday The One Where I Was Quarantined 2020 Shirt to school and was completely shocked. That I was viciously mocked for weeks afterward. Despite me telling her that was exactly what would happen. This particular time was “it’s raining and you will wear your rain jacket”. I hadn’t ever had a rain jacket before that. So I have no idea why it was suddenly the hill she chose to die on that day.

She even knew how much I hated Barney since I made a big, dramatic, 9-year-old fuss over being “forced” to watch it when my younger sister did. She had punished me before when she overheard my friends. And I concocting vulgar versions of the Barney song based on our shared disdain of the purple Saturday morning cartoon block interloper. I stared in confusion for a solid five seconds before I realized he was talking about May 1983 My 37th Birthday The One Where I Was Quarantined 2020 Shirt. I drew like one-page of…in middle school. This reminds me of the year my asshole mother told all of my friends and family to only get me socks for my birthday. Literally the only gifts I got for my 18th birthday were socks.

Official May 1983 My 37th Birthday The One Where I Was Quarantined 2020 Sweatshirt, Hoodie

Yeah, it was just so weird. When all my friends only gave me socks. It is a little funny but also strange that my mother had told them all to do it. When my family came to visit and every present was also socks. And my mother was laughing hysterically in May 1983 My 37th Birthday The One Where I Was Quarantined 2020 Shirt was just awkward. That reminds me of the year my great grandfather gave my grandfather a box of left-handed gloves for Christmas. He’d been collecting all the gloves people left in his store over the decades. And kept them separated by lefts and rights. Not sure whatever happened to the box of right-handed gloves, though. When 10 I said I wanted a brick as a present to my Grandad. and told him I wanted it.